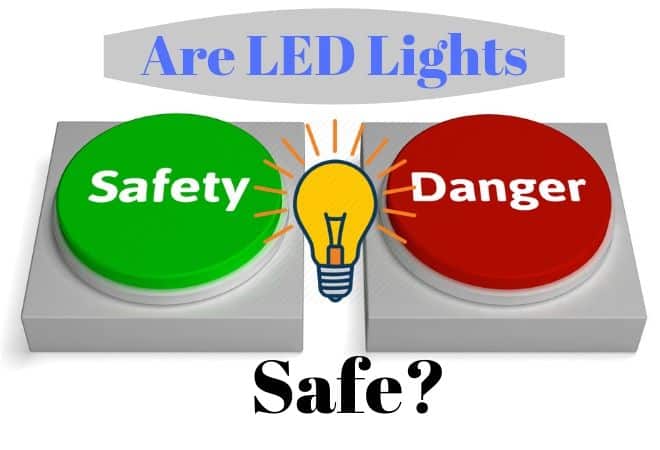 LED is an acronym for ‘light-emitting diode’. It is a semi-conducting source of energy that lights up when currents flow through it. They are very popular on the market today because they are extremely energy efficient and use up to 90% less power than incandescent bulbs. As with any light source, there are both advantages and disadvantages to using them, which begs the question, “Are LED lights safe”?

Are LED light safe? LED lights are generally considered to be safe overall. However, some studies have shown potential health risks associated with one type in particular – the cool-white or blue LED light.

How do LED Lights Work?

LED lights work with the help of a semi-conductor that emits light when a current runs through it. Electrons in this

semiconductor recombine with the electron holes inside the bulb, releasing energy in the form of photons, turning it into light.

How is an LED Light Different from a Regular Bulb?

LED’s are used for so many things nowadays, from Christmas tree lights to motor vehicle headlights. They are small, durable and long lasting. Let’s take a look at the top-ten advantages of LED lighting in more detail below:

Just as there are many advantages to LED lighting, so too are there disadvantages. Let’s explore these in more detail below:

What are the Side Effects of LED Lights?

Using LED lights could have potential side effects. Prolonged exposure has been linked to increased eye irritation, such as redness and itching. Life-long exposure has the potential to cause irreparable damage to the retina, such as cataracts. The reason behind LED’s risk to eyes involves the amount of UV (or blue) light emitted.

Mild headaches have also been reported from over exposure to LED lighting. The most common complaint with LED lights is the burn risk associated with handling them. These lights can get hot, though not as hot as incandescent bulbs (which can reach an external temperature twice that of LED’s). They should always be handled by the diffuser, never the heat sink.

Are LED Lights Safe for Reading?

The answer to the question, “Are LED lights safe for reading?” is yes! A soft, warm LED light is good for reading. However, try to avoid the cool-white ones, as they emit more UV (or blue) light which can bother (and even damage) your eyes after an extended period of time.

Can LED Lights Cause a Fire?

The answer to the question, “Can LED lights cause a fire?” is NO. It is highly unlikely that an LED light would ever overheat and catch fire. LED’s maintain a relatively low temperature in comparison to other lights, such as halogen or incandescent bulbs. The heat they do produce is held internally (as opposed to being emitted externally). As well, LED’s tend to have a much lower wattage then other bulbs. It is the high watt bulbs that pose the serious fire risks.

Are Led Lights Safe to Leave On?

For the reasons mentioned above, LED lights are considered safe to leave on for extended periods. However, the transformer often connected to the lights (think Christmas tree) is why you should turn off LED lights before you go to sleep. The transformer has the potential to overheat and thus poses a fire risk. To avoid this, turn off your LED lights at night to allow the transformer to cool down.

Are LED Lights Safe for Babies?

As most parents know, babies like to look at lights. They are attracted to the colors and the brightness. It is okay for babies to look at LED-lighted images. However, just be sure they are illuminated by the warmer, softer bulbs as posed to the cool-white ones, which pose a potential ‘blue light hazard’, as discussed earlier in this article.

Studies show that although LED and CFL bulbs may have a higher toxic hazard potential versus incandescent bulbs, they are still considered to be relatively safe. The concerns are related to metals such as aluminum, zinc, and copper. The LED studies are not conclusive as to whether the toxins are harmful to humans while being used in the home, or afterwards when they end up in a land fill.

What are LED Lights Used For?

LED’s are considered the future of lighting! They have a variety of uses and almost limitless options. Let’s take a look at some of these uses/options below:

LED lights are a safe, energy-efficient lighting source. They are long-lasting and good for the environment. They have a variety of uses, from home to office, indoor to outdoor. The biggest risk with LED lights comes from the cool-white bulbs that emit higher levels of UV or blue light, which (with prolonged exposure) can irritate and potentially damage the human eye.

The pros of LED’s indeed outweigh the cons. These top-of-the-line, state-of-the-art bulbs are truly the future of lighting  The uses and options for these little lights wonders are almost limitless. So, feel free use LED’s to brighten and illuminate your surroundings whenever possible. After all, it is best to “Live in rooms full of light” – Cornelius Celsus.

Please check out my recommended LED light bulbs page to pick out the right lighting for your needs.

Which Lighting is Best for Migraines