Home
>
Basic Lighting Info
>
How Much do LED Lights Save? – Calculator

How Much Do LED Lights Save? 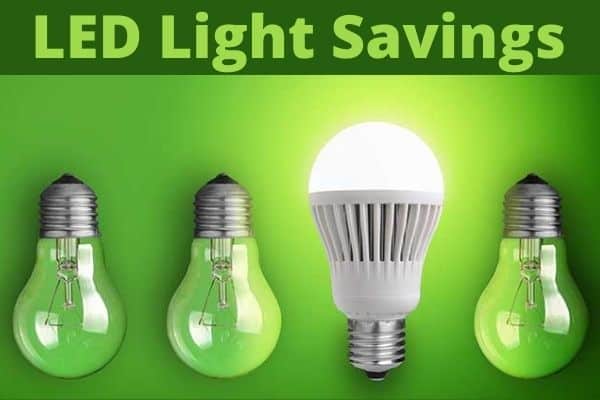 LED, or light-emitting diode, is a semiconductor device that illuminates and produces visible light when an electric current passes through it. A diode is composed of two electrodes — anode and cathode — that allow electricity to flow in one direction. LED lights produce light more efficiently compared to standard incandescent light bulbs or compact fluorescent lamp (CFLs), making them less costly to use.

How Do LED Lights Work?

LED lights are directional light sources and can only emit light in a specific direction. For the current to flow, a light-emitting diode should have a voltage source connected with the positive side on the anode and the negative side on the cathode. This connection will produce light, known as the forward bias condition. Forward bias allows the electrical current to flow through the LED, emitting visible light.

If the positive end of the voltage source is connected to the cathode and the negative end is connected to the anode, the current would not flow. This condition is known as reverse bias, which prevents the electricity from flowing through the LED until it reaches a certain point where it is no longer able to keep the current flow, known as the peak inverse voltage. When this happens, the device will be damaged.

Because LED lights emit light in one direction, they are able to use light and energy more efficiently compared to other light products, such as incandescent lights and compact fluorescent lamps (CFL).

Why Do LED Lights Cost Less to Operate?

Generally, LED lights cost less to operate because diode lights use energy more efficiently. LED lights don’t get hot like other traditional light bulbs. They are technically designed so that they prevent the flow of electricity when it’s not connected to the right ends of the voltage source, which means they don’t produce unnecessary heat that would only waste energy.

How Much Energy Do LED Lights Save?

The average LED light bulb that is used 5 hours per day will save $10-$20 dollars per year in energy costs versus an incandescent bulb.

When measuring how much energy you can save using LED lights, you also need to consider the lumens, which is the amount of light or the level of brightness lighting products can provide. For example, a 60-watt incandescent light bulb can emit up to 800 lumens of light. On the other hand, LED light bulbs can deliver the same amount of brightness using only 10 watts. The lesser your energy usage is, the lesser your cost will be.

Given these considerations, LED lights are generally more energy-efficient and cost-effective.

How Much Do LED Lights Save in Dollars?

The number of kilowatt hours you consume in a month will be multiplied by a rate, which determines the cost of your energy usage. Because LED lights use lesser amount of energy compared to incandescent and CFL lights, people who switch to LED lighting products will see a significant decrease in their monthly electric bill.

Given the above example, you can save up to $1.64 per month or $20.02 per year if you choose to use LED lighting instead of incandescent light bulbs. It’s important to note that the amount of money you can save may vary depending on how many lights you use, how many hours per day you use them, the State you live in, and the current rate electricity rate in your State.

If you want to know how much LED lights save in your hoe, this perfect LED cost savings calculator which will allow you to do just that. You can see exactly how much you will save per month or per year when converting from an incandescent to an LED bulb.

Simply complete the blank spaces with the specs that apply to your scenario. For the cost per kilowatt hour, you can get that from your energy bill or type in the current national average of $.1319

Next, key in the actual watts that each bulb uses. This should be displayed on the box or in small print on the light bulb. The number of watts for an incandescent bulb and a comparable LED bulb should be different.

How Do LED Lights Differ From Other Lighting Products?

LED lights differ from other lighting products such as incandescent lights, halogens, and CFLs in several ways. Here are a few things that make LED lights more preferable:

LED Lights vs. Incandescent vs. Halogen vs. CFLs

Additionally, LED lights can last up to 25,000 hours, which means that you do not need to change your light bulbs for 34 years with proper care and maintenance. This can help you save money, because you don’t have to keep on changing your light bulbs every now and then. Incandescent and halogen lighting products can only last up one to four years, while CFLs can last up to 14 years.

Other Benefits of LED Lighting

Aside from being energy-efficient and cost-effective, there are other benefits you can get from switching to LED lighting, such as the following:

There are many reasons why you should consider switching to LED lighting products for your home and office lighting. While LED lights are more expensive compared to other types of light bulbs, they are generally more cost-effective, considering its long lifespan and the amount of energy it needs to provide a certain level of brightness. Further, LED lights are the best choice for your safety and for the safety of our environment.

Tips for Saving Energy Costs  – Learn a few tips on how to save energy in the home in other ways besides home lighting.

Solar Energy Objections – Although converting to solar is a popular way to save on your electric bill, there are some objections you should know about.