How Many Receptacles or Outlets on a 20 AMP circuit? 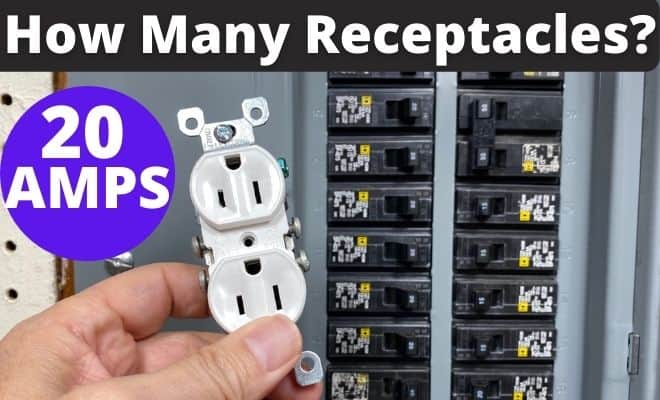 Circuit breakers serve to protect the wires on the circuit from overloading and overheating which could result in damage to the circuit or even a fire. The key to safety is to make sure you are not overloading the circuit by adding too many receptacles or outlets.

What is a Receptacle?

A receptacle is an outlet that is used to plug in a device that uses electricity. If you have a light switch on the same circuit as electrical outlets and that switch controls overhead lights and not an outlet, then that switch should also be counted as a receptacle.

How Many Receptacles on a 20 Amp Circuit Breaker?

Standard practice is to put no more than 10 receptacles on a 20 amp circuit. This assumes that each receptacle will draw an average of 1.5 amps or 180 watts.

Although 10 is the average number or receptacles per circuit, you will also need to understand what the expected use will be for each circuit. For example, bathrooms, kitchens, and garages typically have devices plugged into outlets that draw a lot more than 1.5 amps or 180 watts. However, bedrooms will likely have lamps and other devices that use much less power so use the worst case scenario when determining how many outlets to put on your 20 amp circuit.

Hair dryers and toaster ovens could use up the majority of the 20 amps in the circuit while televisions, computers, and LED lights will use much less.

This chart will give you an idea of how many watts and amps each standard device will use.

Can You Put Lights and Outlets on the Same Circuit?

You can put lights and outlets on the same circuit and doing so can help spread the load between overhead lights which use much less power and outlets which have devices that may draw quite a bit more.

What Gauge Wire is Needed for a 20 Amp Circuit?

What to Do If Your 20 Amp Circuit is Overloaded

If you have an older home with a less than optimal wiring configuration, you may have too many receptacles on the same circuit.

The first step is to see what you can unplug from the outlets or to refrain from using too many devices at the same time. However, that is not always a realistic way to reduce the amps being drawn through your circuit.

The most effective way to deal with an overloaded 20 amp circuit is to split the circuit in half by running a new wire from an independent breaker to handle half of the load.

We had an overload situation in our home where two bathrooms were connected to the same circuit. With a house full of people using the bathrooms in the morning and in some instances using a hair dryer at the same time wire nuts were melting and it was creating a hazardous situation.

The fix was to bring an independent 12 gauge wire tied to a 20 amp breaker for one of the bathrooms. This immediately solved the problem and created a much safer situation in the home.

How Much do LED Lights Save? – plus calculator

How to Wire a Light Switch

What is a Circuit?